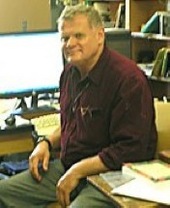 I am English and will try to show you how to make a proper cup of tea, not an easy thing to teach Americans since you tried to make it with cold salty water in Boston. I have high standards. I start my first lecture by saying, “I have many distinguished teaching awards, and yes, I deserve them all.” I am voted favorite prof by the UW dorms most every semester. I am an old time computer geek going back to paper tape in the 1960s. When I see PowerPoint I see a programming language. My PowerPoints are the best, but I mostly lecture off three slide projectors in synch.

I studied Botany and vegetation in the Welsh mountains and was an accomplished rock climber when my power to weight ratio was better (I’m losing on both ends — less power more weight). With Ph.D. in hand, I went to teach in Nigeria for 2 years, but never became a tropical botanist. I remain a theorist. I have been on the UW faculty in Botany since 1970, filling the spot of John T. Curtis in vegetation analysis, teaching ecology. In the 1970s I got into early developments of complexity theory, even before chaos theory and all that. I am probably the world leader in hierarchy theory which connects levels of analysis. It makes me one of the few post-modern scientist. I am anti- realist and am convinced science is about telling compelling narratives not finding the truth. In 2008-9 I was President of the International Society for the Systems Sciences ( Margaret Mead, Nobel Laureate Ilya Prigogoine and economist Ken Boulding all had the job at one point). I go with Hutchins (President of U Chicago in the 1930s and 40s) who said :”The gadgeteers and data collectors, masquerading as scientists, have threatened to become the supreme chieftains of the scholarly world…. As the Renaissance could accuse the Middle Ages of being rich in principles and poor in facts, we are now entitled to inquire whether we are not rich in facts and poor in principles.” He was right then and more so now! We are tyrannized by our technology telling us how things work, because that blunts our curiosity and confidence as to how things might otherwise work.
Tim Allen has recently retired, but designed and taught for 30 years the following course: