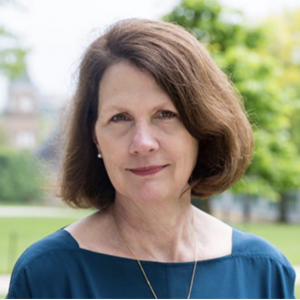 Laura McClure has been a member of the ILS faculty since the early 1990s. She began with a special topics course, ILS 275: Literature and Society, which examined 19th century women writers and the classical tradition. She soon moved on to teach ILS 203: Western Humanities: Literature and the Arts I. Her favorite part of that course is introducing students to Christian concepts from a pagan perspective; it’s kind of mindblowing for them to see how strange these ideas must have appeared to the average Roman. From 2002 to 2006, she chaired the ILS program, and much enjoyed the opportunity to learn more about Meiklejohn’s legacy. As a member of the Classics department, Laura teaches a broad range of courses, anything from intermediate ancient Greek and Latin, to civilization of ancient greece, women in antiquity, and graduate courses on Greek tragedy. She also travels frequently to Greece and Italy to teaching in UW’s study abroad programs. Her books include Spoken Like a Woman: Speech and Gender in Athenian Drama (Princeton, 1999) and Courtesans at Table: Gender and Greek Literary Culture in Athenaeus (Routledge 2003). She has published numerous articles on Greek tragedy, women in antiquity and the classical tradition. Her current research focuses on the representation of mothers in Greek tragedy. A native of the great state of Oregon, Laura is married to Richard Heinemann, an attorney, and has three funny, energetic boys, Nikolas, Jakob, and Gabriel. When not in front of the computer, she plays way too much tennis, loves to cook, and does the occasional gardening.