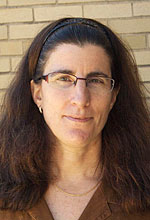 Patricia A. Rosenmeyer is delighted to be teaching ILS 203 for the first time this fall (2009). She earned her Ph.D. in Classics and Comparative Literature at Princeton, and taught at Michigan and Yale before taking up her current position as Professor of Classics here in Madison. She is particularly interested in forms of lyric (Greek, Latin, German, French, Hebrew, whatever), but is happy to read (and teach) any and all literature. Her publications include The Poetics of Imitation: Anacreon and the anacreontic tradition (1992); Ancient Epistolary Fictions: the Letter in Greek Literature (2001); Ancient Greek Literary Letters: Selections in Translation (2006); and articles on Greek archaic and Hellenistic poetry, Ovid, the epistolary novel, Greek inscriptions, the reception of Greek lyric in French early modern writers, and the 20th-century Alexandrian poet Cavafy. She is currently working on two book-length projects: Julia Balbilla and Women Writers in the time of Hadrian (on Greek poetry in the Roman empire) and Reflections of Sappho (on the reception of Sappho from antiquity to the present). When she isn’t doing research, she enjoys conversing with students, playing chamber music, practicing yoga, and spending time with her family and beloved cat. She is slowly getting used to having a guinea pig in the house.